Hi Everyone,
Jess here today with a Christmas Lantern. 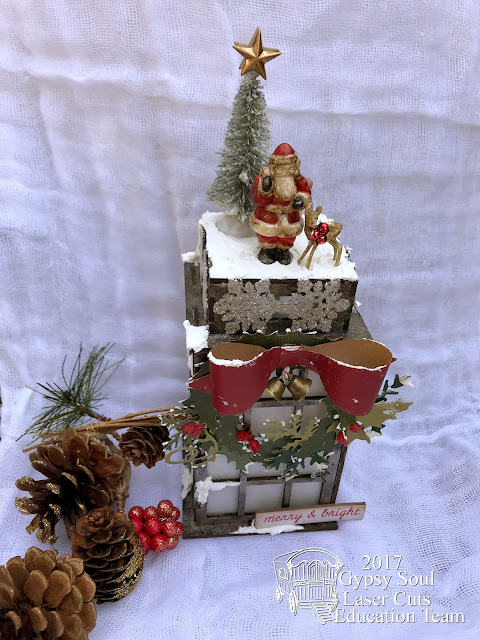 I have to admit I had one idea for this lantern and it turned into something completely different.
I started by assembling the lantern, just to be sure I was doing it correctly and so I would know what I would need to paint.
I disassembled it and started painting. 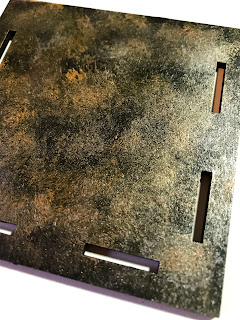 This is a really heavy duty chipboard and paint doesn't absorb into it like it does with thinner chipboard.  I did not put down a layer of gesso. I just went right in with a thin layer of black acrylic paint.  The entire piece was covered.  Once the black was dry I stippled on metallics.  I used bronze, gold, and silver.
To decorate the top I used the snowflake border from the Winter Shape Set.  Two snowflakes fit perfectly on each side of the top.  The snowflakes got a quick coat of silver paint.I wanted to add glitter, but didn't want to deal with using glue to make the snowflakes tacky. I decided to run them through my Xyron sticker maker on the painted side.  I added a clear glitter and had very little mess.
The snowflakes were glued to the top. 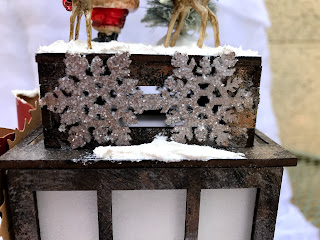 Here's where I changed my mind.  I decided I wanted to make this look like an actual lantern and not a winter scene inside the lantern like I had originally planned.  I took plain tissue paper and Tim Holtz's Frosted Film to line the inside of the panels.  Vellum would work too, but I like the frosted film because it gives an icy look and feel.  I did not attach the one side that isn't notched so you can add a flameless candle inside to make it look like a real lantern. 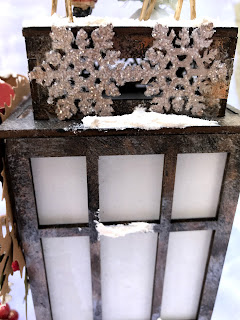 Grit paste with glitter sprinkled on top made the snow on the lantern.  The top was covered with grit paste and my pieces were stuck in while it was still wet. 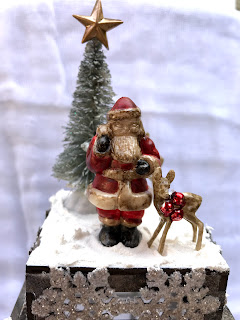 The front of the lantern has a holiday wreath and the sentiment. 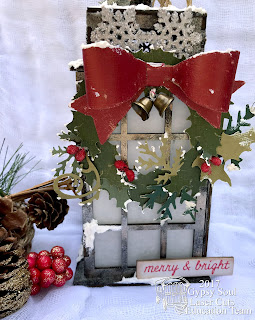