They say January is the time of year to make resolutions and to turn over new leaves, not that there are any leaves on the trees outside of my windows. My latest post about H. P. Lovecraft had me thinking about the wonderful creatures he created. I've always loved the old classic monster movies and it is the inspiration behind this blog post. So back to doing new things, I've rarely used words in my art projects and would never think to use the Alphabet Stencil Blanks that came in my last kit but I was intrigued and challenged myself to use them in a uniquely Jon David Fashion.  I came up with the idea for my GSLC Monsters and Mysterious Creatures ABC's. I'll be presenting a few letters each month until I have completed the whole set.

Something else you might not know about me but I hate "messing around with art supplies", I am product driven and not process oriented. I'm the annoying person you know who always asks, "Are we there yet?" I like to start each day with a plan of action and I struggle to live in the present to simply "be" so I've also challenged myself to see how many different ways I can alter the chipboard. Join me in this journey of self discovery and introspection. 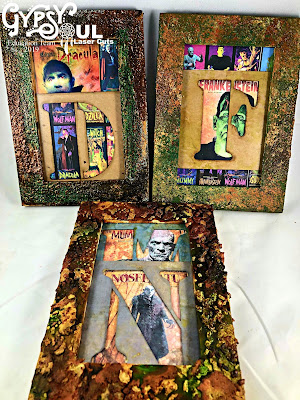 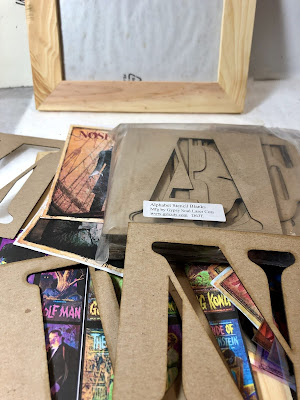 2.  Print Images of your choosing to represent each letter, I have decided upon a Monsters and Mysterious Creatures one and not sure what I will find. I was inspired by Dave Bell Graphic Artist of Classic Monster Posters and will start with them.
3.  I am using 3 small 5" by 7" inch IKEA wooden frames to showcase each of the letters.
4.  I am a texture type of guy so I want to alter the frames and give them added interest. I want them to look similar but not the same like they are part of a collection.
5.  For the first frame I used various Ice Resin Enamels in German Silver and Torched Copper and Embossing Enamels in Aged Hunter and Aged Copper. I layered them and cured with a heating tool. This method can also be used on any of the GSLC chipboards as I will probably use later in my project. 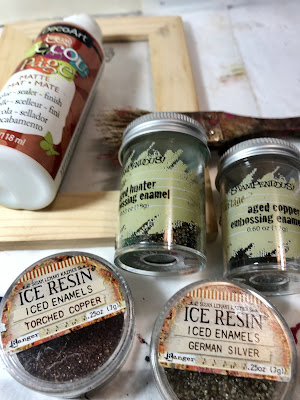 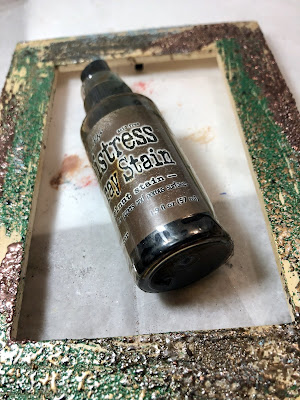 7.  The second frame was aged using Finnabair rust pastes in greens, browns, and orange placed on randomly with a paintbrush. I then used transparent burnt sienna ink to fill in any empty spaces. Once again this technique can be used on any of the GSLC chipboard pieces. 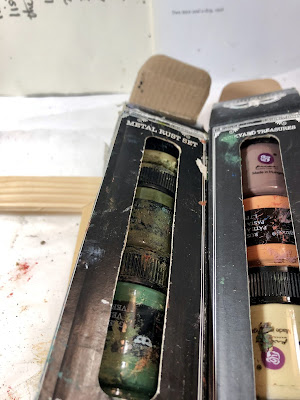 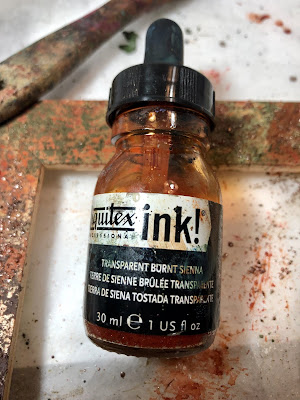 8.  The final frame was given a patina using Tim Holtz Distress Grit-Paste and Ferro-Copper Paste applied with a thin plastic spatula using a  Snake Skin Stencil and further distressing with alcohol inks in browns and greens. Once again this technique can be used on any of the GSLC chipboard pieces. 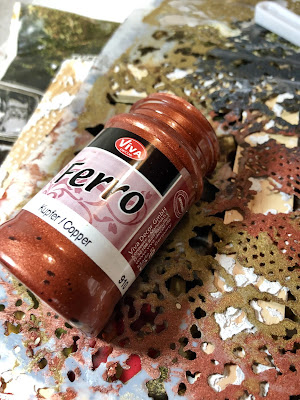 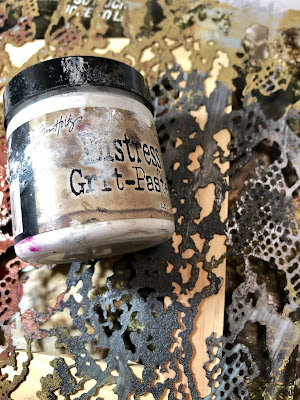 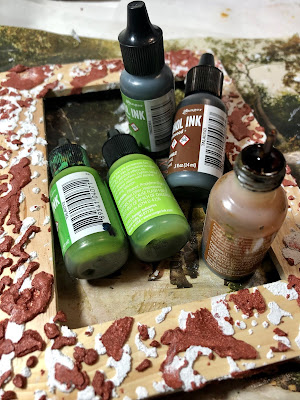 9.  Now you are ready to start your alphabet collection.
I chose to begin with D is for Dracula as I had a Dave Bell Image to use, I left the GSLC Alphabet Stencil Blank in its original state as a I wanted to showcase it in its purest form. 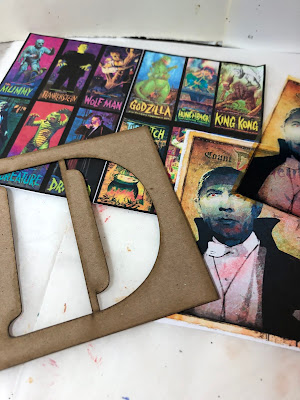 10.                I also found some bright classic monster posters and used them behind the GSLC Alphabet Stencil letter "D" securing with Weldbond. 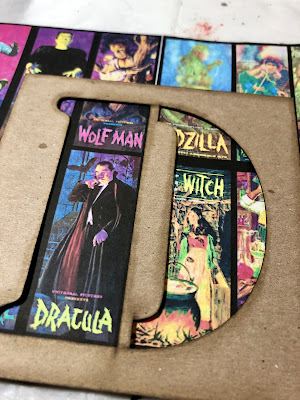 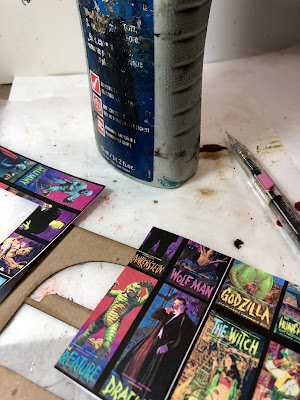 11. Next I layered the Dave Bell Dracula image with a transparency of the same and composed my first Monsters and Mysterious Creatures Alphabet.
12.  Next up was the GSLC Alphabet Stencil letter "F" for Frankenstein.
13.                This time I gently added patina using Tim Holtz Distress Stains-Crushed Olive, Brushed Corduroy, and Fossilized Amber and a spray bottle of water. I like the subtle look sometimes on the GSLC chipboard pieces. 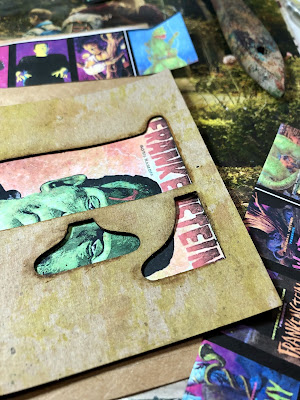 .             14.   I composed my second frame using GSLC Alphabet Stencil letter "F" Frankenstein and some bright classic monster poster images I used previously securing with Weldbond.
15.                The final two for this installment of my Monsters and Mysterious Creatures Alphabet were GSLC Alphabet Stencil letter "M" for Mummy and "N" for Nosferatu. This time to patina the GSLC pieces I used Tim Holtz Distress Oxides-Peeled Paint, Faded Jeans, Walnut Stain, and Fossilized Amber layering and spritzing with water and a heating tool and edging with a Tim Holtz Distress Marker in Vintage Photo. 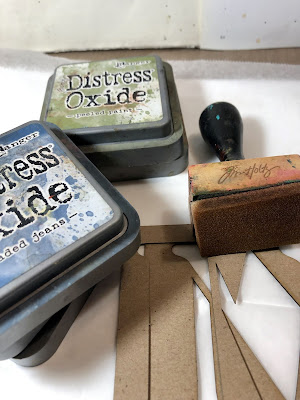 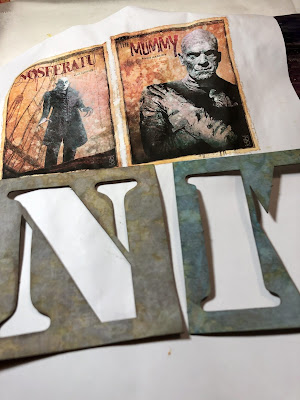 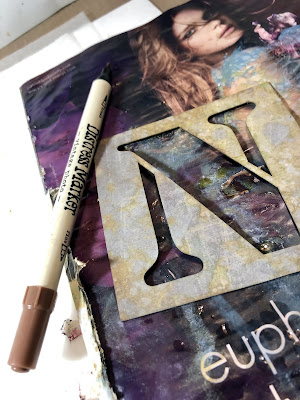 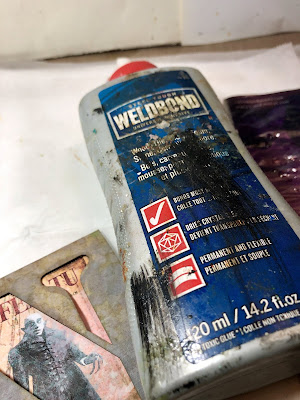 16.                I composed my third frame using GSLC Alphabet Stencil letters "M" Mummy and "N" Nosferatu securing with Weldbond seeing if I could stack the letters. I was not thrilled with the results and in the future give each letter its own place in the frame.
17.                This begins my first installment of GSLC Monsters and Mysterious Creatures Alphabet. Each month I will be adding additional letters and highlighting different techniques you can use to embellish the Gypsy Soul Laser Cuts chipboards. I hope I can find an image for each of the letters the challenge is on!! 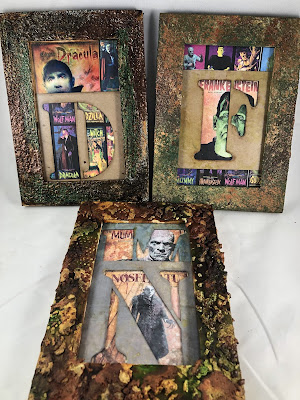 Some final thoughts.
"D" is for Dracula prince of the night sky. 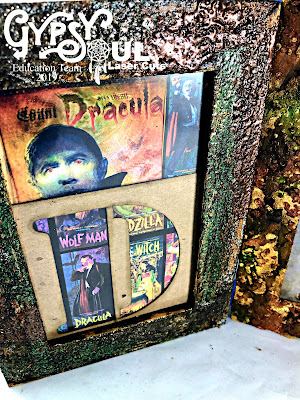 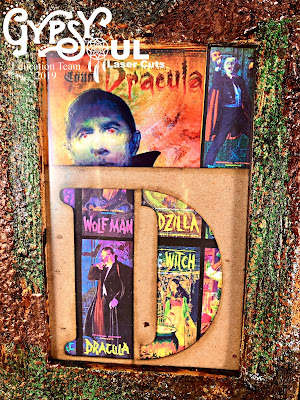 "F" is for Frankenstein a misunderstood guy. 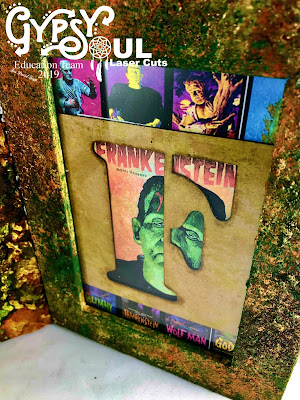 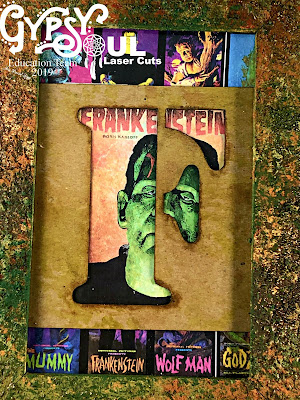 "M" is for Mummy a tortured soul.
"N' is for Nosferatu from whom Dracula's name stole. 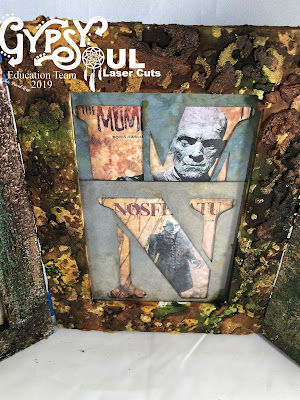 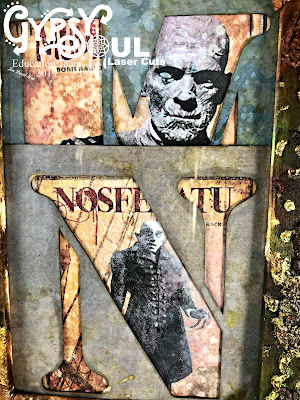