It is fitting that my post on 9/11 brings us to an iconic New York building.  This whole series was to show us that things are not always what they seem. There are real monsters in this world but sometimes they are not what people say they are. I will be reusing the Small 5" by 7" Wooden IKEA frames I added to patina to the last time and have included those steps here for reference. This time I will Infusion Coloured  Stains and water to alter the Gypsy Soul Laser Cuts Alphabet Stencils for "K" is for King Kong, and "X" is for X-men many marvelous and mysterious creatures. Remember this technique can be used to alter any of the GSLC chipboards. 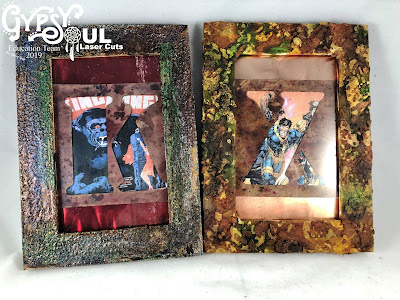 1.  Take GSLC Alphabet Stencil Blanks from Package.
2.  Print Images of your choosing to represent each letter, I have decided upon a Monsters and Mysterious Creatures one and not sure what I will find.
3.  I am using 3 small 5" by 7" inch IKEA wooden frames to showcase each of the letters.
4.  I am a texture type of guy so I want to alter the frames and give them added interest. I want them to look similar but not the same like they are part of a collection.
5.  For the first frame I used various Ice Resin Enamels in German Silver and Torched Copper and Embossing Enamels in Aged Hunter and Aged Copper. I layered them and cured with a heating tool. This method can also be used on any of the GSLC chipboards as I will probably use later in my project.
6.  I added Tim Holts Distress Sprays in Walnut Stain to add additional patina.
7.  The second frame was aged using Finnabair rust pastes in greens, browns, and orange placed on randomly with a paintbrush. I then used transparent burnt sienna ink to fill in any empty spaces. Once again this technique can be used on any of the GSLC chipboard pieces.
8.  The final frame was given a patina using Tim Holtz Distress Grit-Paste and Ferro-Copper Paste applied with a thin plastic spatula using a  Snake Skin Stencil and further distressing with alcohol inks in browns and greens. Once again this technique can be used on any of the GSLC chipboard pieces.
9.  For altering the GSLC Alphabet Stencil Blanks this time I will be Infusion Coloured Stains and a spray bottle of water. 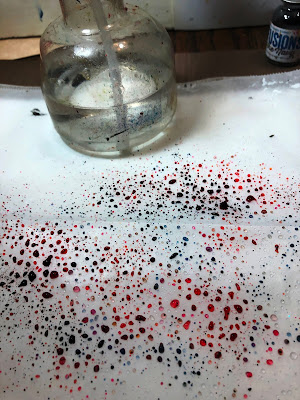 10.                I used different colors on both the GSLC Alphabet Stencil "K" and X". You can sprinkle them both on a nonporous surface and spray with water bottle or sprinkle directly onto chipboards and then mist with a water bottle. As they are water based and if they will be exposed to the elements they should be sealed in a matte medium. 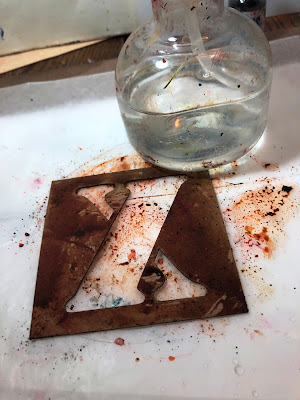 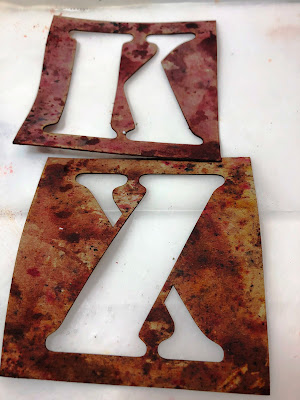 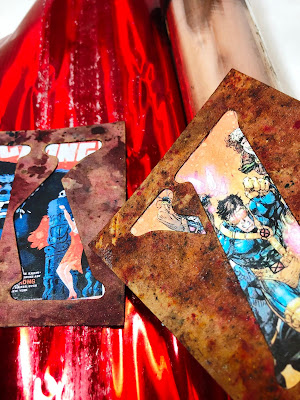 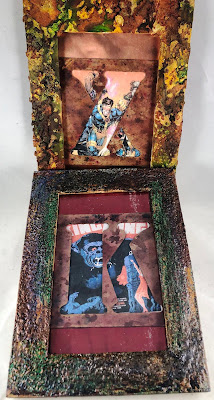 Some final thoughts.
"K" is for King Kong, the story of a caged animal who just wanted to find love and to roam free. 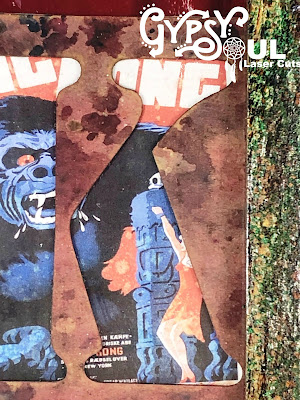 "X" is for the X-Men, the story of powerful mutants  fighting in a world of normals for peace and equality. 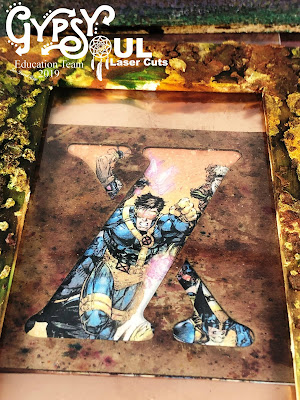 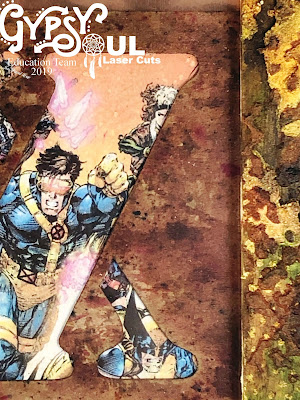 Thank you for joining me in the journey of discovery and introspection. I'm proud of my resiliency and completing such a lengthy project. Now like from a scene from one of my favorite shows, Young Sheldon, when MeeMaw and Sheldon complete the game and they look at each other and say "Now What?"  and they decide to rush out to Radio Shack to buy new ones to master. I do feel a strange sense of sadness as I say goodbye to my Monster and Mysterious Creatures Alphabet. Maybe I need to arrange them alphabetically and show them in the entirety, but this is a task for another day.