The Secret Word is FUN!

Happy Saturday! Today's project is truly a nostalgic one. My daughter and I never missed watching Pee Wee's Playhouse together on Saturday morning when she was little. The show's amazing playhouse set decoration inspired me to make my own version using the GSL 7 by 7 Corner Room Box The room box itself couldn't be easier to assemble with a bit of tacky glue. It's just 5 pieces: The floor, two walls and two 7 x 0.5 inch support pieces for the box's floor.

The scrapbook paper I used doesn't 100% match the walls of the playhouse on TV, but they are close enough to evoke the feel of it. I made the flooring from gray, white and black cardstock and a few interesting hole punches.

I used two of the smaller GSL Mini Shadowbox Set boxes in this project. One is used for Jambi the genie's box and the other is used for the aquarium's base. This set of boxes is so versatile!  I use them in lots of projects. 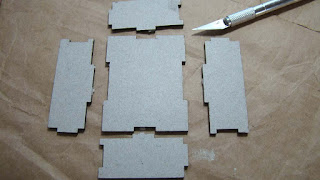 "Wish? Did somebody say 'Wish'?” Jambi grants Pee Wee one wish per day. I painted the interior of the box black and the exterior a sparkly purple. I printed out a Jambi image and added a red jewel and feather to his turban. He is mounted on a bit of foam to add some dimension.  His box sits on top of a dollar store bedside table that I painted red.

I made the doors to his box out of white polymer clay. After baking, I painted one side with Lumiere Burgundy metallic paint and Martha Stewart amethyst glitter paint.

The other side got a coating of Lumiere Metallic Silver and Martha Stewart sugar cube glitter paint. It was finished off with dots of Ranger Stickles and a few flat back jewels. "The wish has been granted. Long live Jambi!".

Clocky was sculpted out of yellow and white polymer clay. The red and black accents were done with Sharpie markers. The numbers in his smile were cut from a piece of junk mail.

Mr. Window was a fun project. He's made from a GSL 6 Panel Window.  After removing the lowest vertical spacer, I gave it a primer of gesso then painted it with a yellow acrylic paint. A realistic sky scrapbook paper was cut to fit the window.

The only things left to add were googly eyes and a dollhouse window pull (with straight pin heads glued in place to represent nails).  I clipped the pin shafts off once the glue was dry.

For Pee Wee's aquarium, I pulled two plastic fish out of my stash then removed their eyes (!) and replaced them with googly eyes.

Their aquarium is made from a GSL Number Card cut in half and painted black, a coffee stir stick , some aquatic scrapbook paper and a snippet of plastic greenery.

I sandwiched them all together and held it with craft clips while the glue dried.

The flowers that introduced the King of Cartoons were assembled from glitter paper, cardstock and googly eyes.

Chairy figures are available online but I decided to needle felt her instead. Her eyes are teddy bear eyes topped with fake eyelashes.  It's only the second needle felted project I've ever attempted. I'm pretty happy with how it came out.

This is maybe my most fun project I've made in a long time. I'm guessing you either were brought on a nostalgic journey along with me or are left wondering what the heck? At any rate, for the rest of the day when anyone says the secret word, scream real loud! 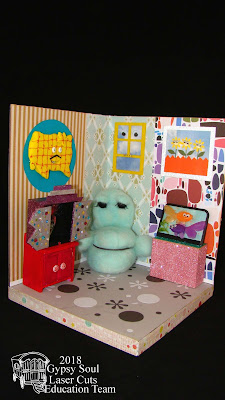 Posted by Connie Littell at 1:00 AM