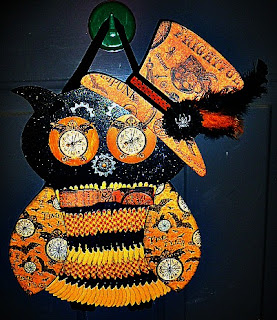 I spray painted the owl with black paint.  While I waited for the paint to dry, I punched about 250 feathers out.  It seems like a lot of work but it only took about one hour total.  On the solid color feathers I used a Gelly Roll Pen to create "feather" lines.  After the paint dried, I used black and orange Stickles on the head of the owl, which I dubbed Clarence. 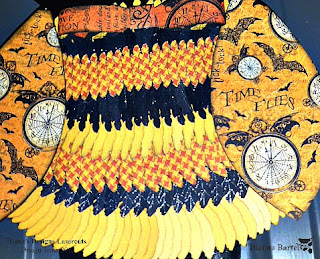 Clarence's wings were traced and cut out of Graphic 45's Time Flies paper. I then fussy cut two extra for the eyes. The bow was cut from a 1-inch strip of paper.  I glued it in a circle then pinched the middle, cut two tabs on the sides then used and extra strip to wrap around the middle. I then used a strip of scrap envelope (one that was sent to me) and glued it to the middle of Clarence.  I did this in order to give the feathers a better base to stick to.  I inked all of the feathers (including the black ones). 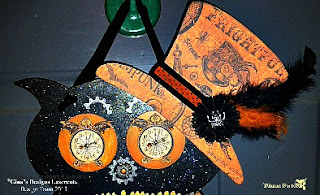 I traced the top hat on Graphic 45's Steampunk Spells.  I used a black velvet ribbon, a black rosette, and black feathers.  The orange ribbon and orange feathers for a pop of color. The silver spider finishes the hat. 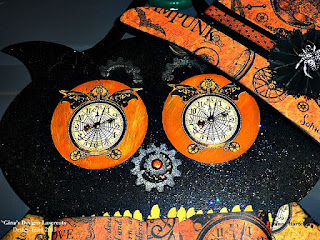 I used gears for Clarence's nose, which were inked black.  I cut a gear in 1/2 and inked that as well.  I painted the eyes orange and because it was such a bright orange I inked the whole circle.  I used the two clocks as eyes and used metals clock hands.

Posted by Angela Drummond at 1:30 AM