Hi Everyone, Dianna here with a Halloween Witch Owl.  Gina made me a witch hat to fit the door owl.

I started by spray painting the owl, hat, eyes and wings black. I then used a Fisker double feather punch and punched about two hundred feathers in black, green and two different colors of purple. 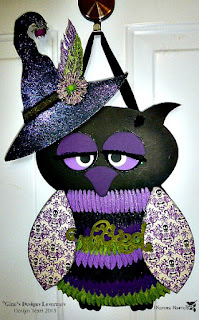 I could not help myself and made Wanda's eyes with eye lashes. (Yes, I named the owl Wanda).  I traced the eyes, fussy cut them and then cut them in half for the eye lid.  I then punched a 2-1/2 circle in purple,  a 1-1/2 inch circle in white and a 1-inch circle in black. I then cut straight lines in a two inch strip of black paper for the eye lashes.  Around the black circles I used Stickles to give the eyes some more pop.  The nose was traced and fussy cut out. 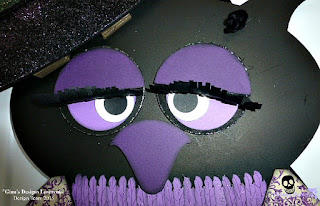 I used black Stickles first and daubed all over the hat.  Then I used a dark purple Stickles and daubed that all over also.  A light purple Stickles was then used to create highlights.  I created a rosette with the same paper as the one on wings.  The feathers were colored with purple and green markers. Stickles was also used on the feathers.  The spiderweb was colored with a white paint marker and white Stickles. The purple and green spiders were left over from previous project. 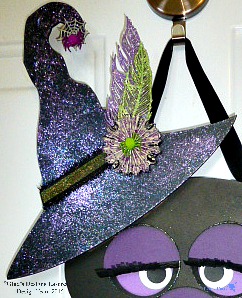 I sprayed Gina's "Wicked" with green Maya Mist and it dried just like the picture.  I placed another spider on the title and glued it to the wings.  Done! 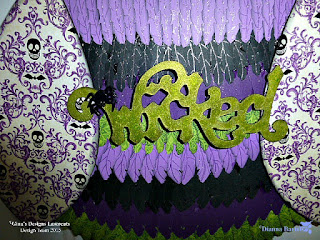