Today I have two mitten ornaments to keep you "warm." I had to keep these little guys under wraps until after Christmas since they were gifts. To start off the projects, I used a mitten for the base from the Mitten Micro Mini Album. 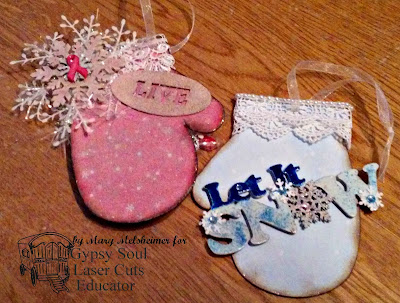 For my "Let it Snow" mitten, paper from my stash was adhered with glue. Once dry, I used an emery board to file the paper down to match the mitten. You would think I would have learned by now how to use a scissors! The edges were then inked with brown. Once that dried, I used my Wink of Stella pen over the top. The "let it snow" from Winter Shape Set was heat embossed with different blues and whites. The snowflake was treated with glitter glue. A double layer of lace, pearl trim and organza ribbon finish this one off. 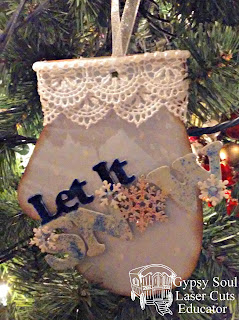 The next mitten was for a co-worker who is at the 3-year mark of betting breast cancer. For this one, I did the same as above, but used the Wink of Stella pen over the entire mitten, not just the edge. A single layer of lace trim peaks out from under a layer of three snowflakes, one from my stash and the other two are from the Snowflake Shape Set. Both the chipboard snowflakes were heat embossed. I finished the layer off with a plastic, pink awareness ribbon. The oval "live" is from the Word Stackers 1 collection and was heat embossed as well. 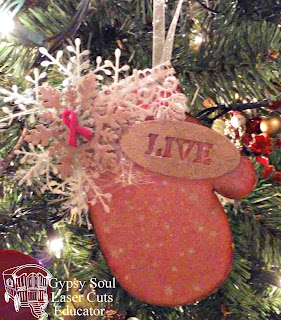