Hey guys, Jess here again and this week I'm not just bringing you a new project, but a children's story I've written to go with it. 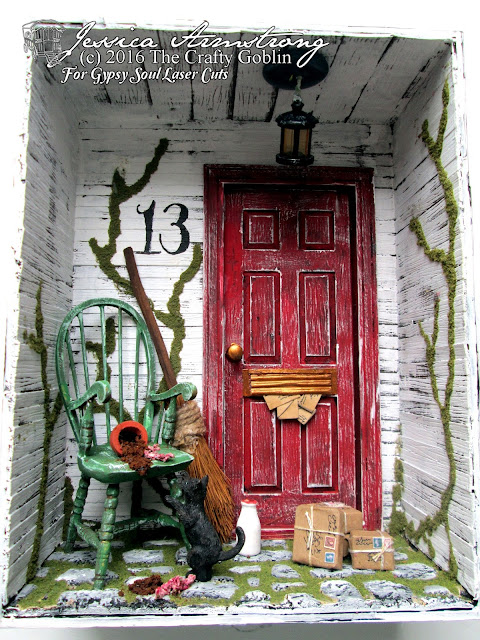 13 Acorn Lane
This is the story of a witch, Ms. Daisy Buckle, who lives at 13 Acorn Lane, the house with the red door. Her curly red hair is piled atop her head and fastened with an array of bobby pins. She has green eyes and a trail of freckles painted across her rosy cheeks.
Her black cat, Mr. Theodore Buttons (who must always be called by his full name, lest he be terribly upset) wakes her up every day at precisely seven in the morning. He pounces upon her chest and meows loudly until she greets him.
Today, Daisy climbs out of bed and tiredly wanders into her kitchen to make her morning jasmine tea. As her tea steeps, she checks her mail slot to see if there is anything besides bills (as there normally is). Instead of bills, she finds a red envelope neatly stuffed through the mail slot. Picking it up, she notices it is from her far away friend, Mrs. Dorothy Pennybottom. Mrs. Pennybottom has written to her, asking that she come and visit her across the pond at her residence for an upcoming lunar festival.
Unfortunately, Mr. Theodore Buttons would not be permitted on the airplane (as it was too far to fly on her broom), which left Daisy with an uncomfortable dilemma to ponder as she sipped her tea.    She hadn't been to a lunar festival in quite some time and it had been even longer still that she had seen her friend Mrs. Pennybottom. But poor Mr. Theodore Buttons – what would he do all by his lonesome?
She pondered the situation all day and well into the evening. It was just about bedtime when Mr. Theodore Buttons wandered into the kitchen where she was sitting. He jumped up on the table and sat in front of her. He meowed loudly at her, but she didn't look up. He meowed again and she still didn't look up. Finally, Mr. Theodore Buttons said (in a most distinguished voice), “Daisy, why don't you go and visit your friend Dorothy across the pond and I'll go and visit my relatives down the lane. I'm certainly able to fend for myself while you're away and you won't have to worry one bit about me.”
Daisy blinked at him. He had never spoken to her before, though she had often thought he'd wanted to. He was, of course, completely right. He did have family down the lane and would be able to take care of himself while she was gone.
She would of course miss him, but he seemed thoroughly excited at the prospect of visiting his own family.
So she packed her bag and picked out her favourite broom and left for her friend Mrs. Pennybottoms house, where she had a lovely time. Mr. Theodore Buttons left the house and went on his own adventure to see his family down the lane, but that is another story altogether.

The roombox is designed inside the split front box from GSLC, but I have removed the outer part of the box to use in a later project. The box measures 8.75 inches wide by 6.75 inches tall by 3 inches deep, which is just perfect for fitting a miniature 1:12 scene inside. You could, of course, also do a 1:24 scene and would have even more space to fit tiny things. 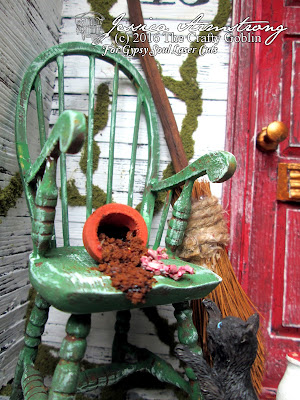 Here, Mr. Theodore Buttons has knocked over one of Daisy's flower pots she'd left outside. 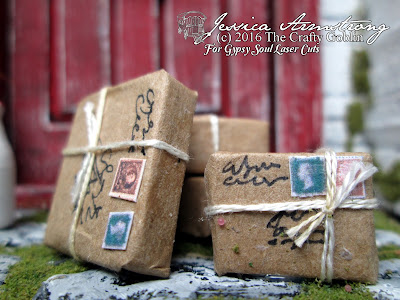 Some packages waiting to be retrieved upon Daisy's return. 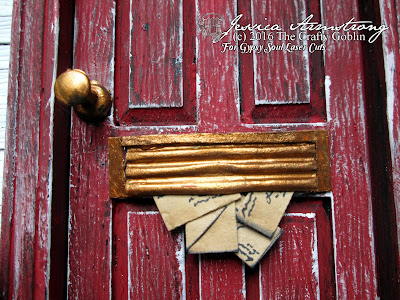 her mail slot is stuffed with letters from far away friends. 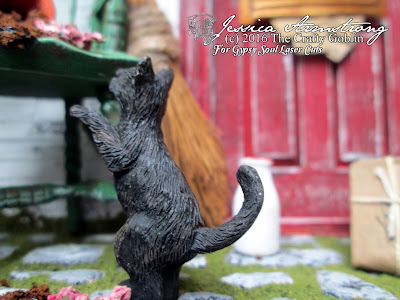 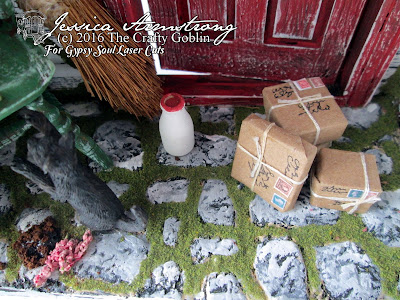 Here you can see the cobblestone floor I've built inside the roombox using the cobblestone texture from GSLC. I've used the sheet as a stencil and a ball point pen to trace the pattern onto a piece of foam core, which is then painted to look like stone. I've used a moss effect to fill in the in between bits. 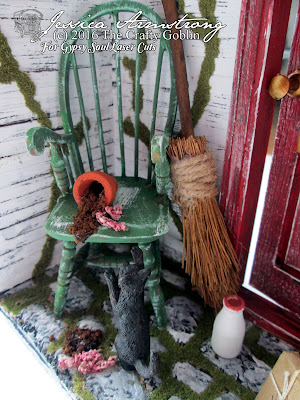 I'm never happy with brooms from miniature shops, so I've made my own from a twig and coconut fiber. 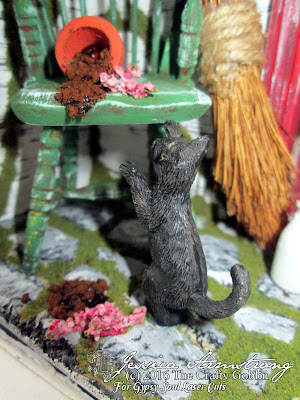