Today I have a fun and easy recycling project to share using some old CDs. I thought I would make a sun-catcher and hopefully convince the sun to show its face since we've had so much rain so far this summer. 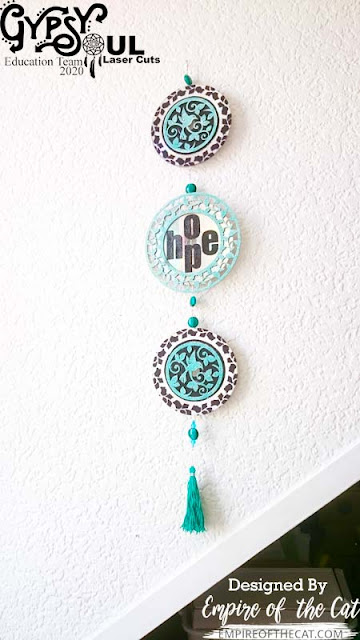 I started off making a totally different project until I spied these old CD-ROMS sitting on my table from a recent clear out and they inspired me to switch up what I had planned.  So I have these chipboards from GSL; on the left is the leafy circle frame and on the right is the hummingbird medallion, which had two in the pack.  So I was looking at my old CD and these chippies and trying to decide where to go next since I had two birds and one circle frame. 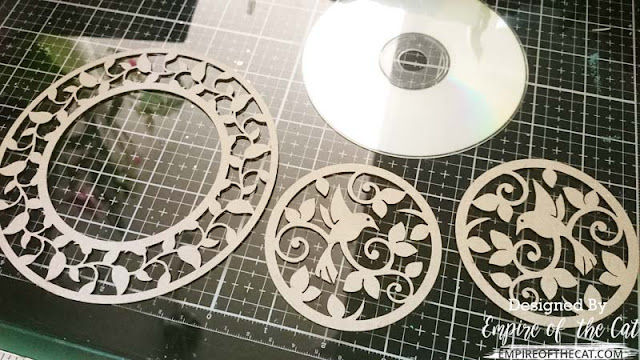 My first thought was pretty obvious, just add both to the CD since the medallion conveniently fits inside the circle frame, but then I would have one bird left over and I have quite a few of these old CD-ROMs so I wanted to find a way of getting more out of what I had and maybe even make a much bigger project than planned. 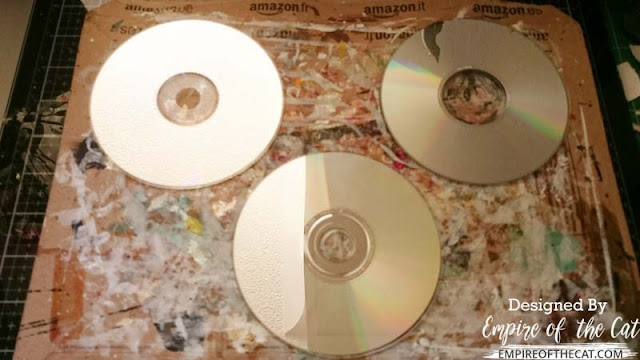 So I decided to use the chipboards as stencils first before using them for their usual purpose.  If it hadn't been CDs I was using, I could have sprayed something through them like ink or paint, but I didn't actually have anything that would adhere to the shiny CD and I didn't want to paint them first since the whole point was to have the shine.  Then I decided to try a different idea. I taped the CD to the work surface and taped the chipboards on top, then got to work with my idea. 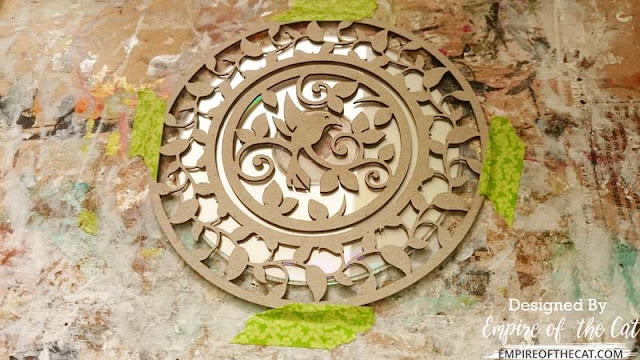 I used a stippling brush with some embossing ink to stipple through the chipboard "stencils" and when I removed them, I was left with this pattern made from the sticky embossing ink. 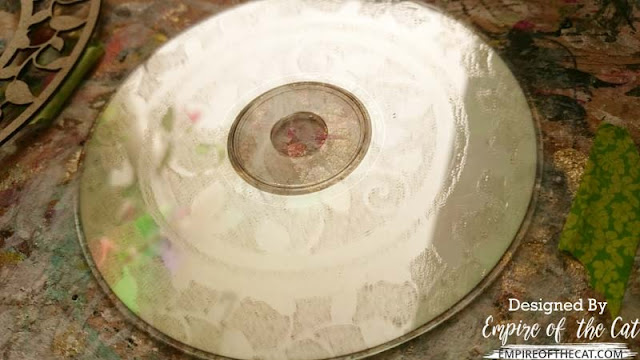 I then applied Wow's Black Glint embossing powder and very carefully melted it with my heat gun.  Please note that CDs are made from plastic and so don't overheat the embossing powder or you could melt or warp your CD.  If your heat gun has a low setting, use that, and apply heat all over the surface evenly. I laid all three CDs out on my table to see how they looked together before I glued anything down.  I started to think of words that could maybe fit in that space in the centre of the leafy frame.  I chose HOPE as I think we could all use a bit more of that at the moment. Time to start assembling - I used this very strong Gutermann fabric glue to glue the chipboards to the CDs.  It's a glue I use a lot for gluing things to fabric, including metal, so I knew it would definitely be able to glue chipboard and cardboard to metal.  I glued everything in place and put something heavy on them to hold them down while they dried. 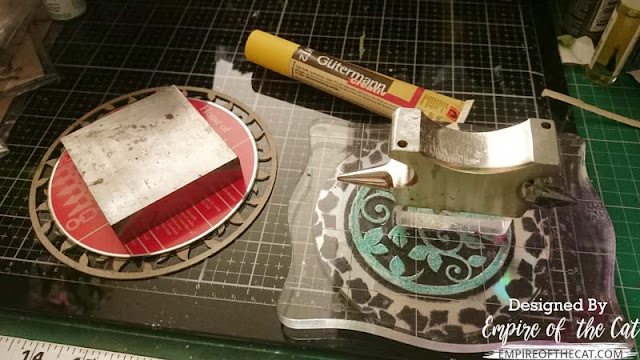 Once all the chipboard pieces were glued in place, I glued the black letters in the centre of the circle frame which would be my centre piece, and held them down with something heavy. 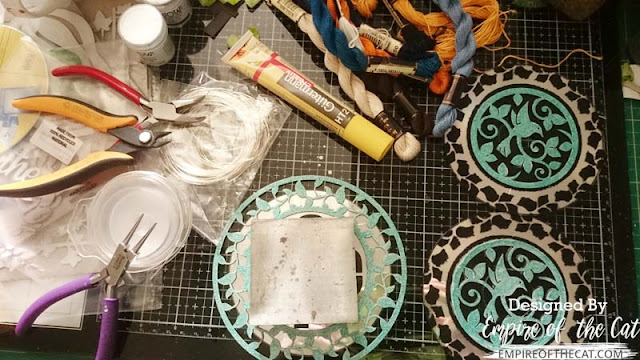 The embossing powder I used on the chipboards is by WOW and is called Sea of Tranquillity.  It's a great turquoise colour and contrasts well with the Black Glint.  I could have just covered the whole centre of the CD with black instead of stencilling but I hadn't decided what I was doing at that point and I do really love the stencilling. 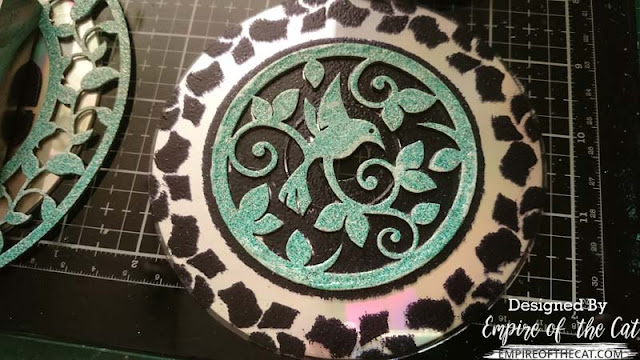 The HOPE letters are die cut from cardstock using Altenew Bold Alpha dies and then I heat embossed them with the same Black Glint embossing powder as before and arranged them in the centre of the CD. 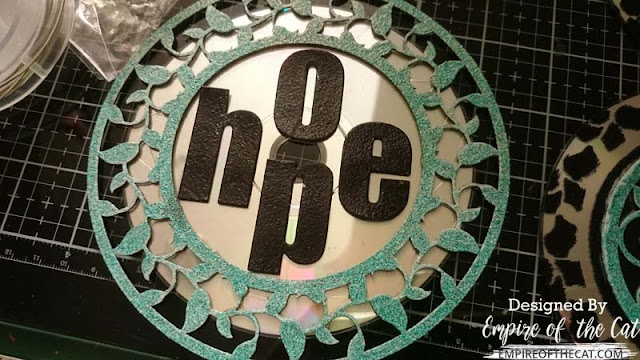 Now that everything was glued in place it was time to attach the CDs to each other to make the sun-catcher.  I decided to use wire for this job, but there are other options you could use, and I will list some of them at the end of this post.  I cut three pieces of 18 ga wire that each measured eight inches long.  I used my pliers to make an eye hook at one end of the wire and then threaded one of these green lampwork coin beads on to it. 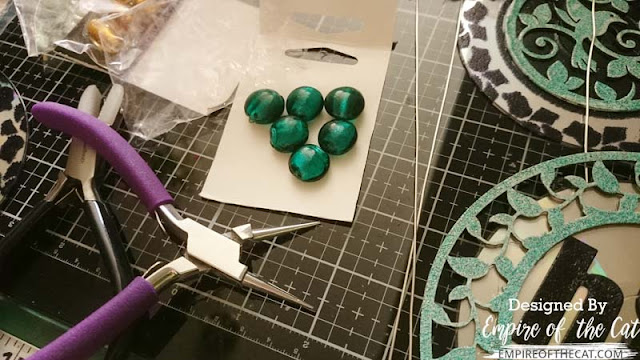 I wanted my sun-catcher to be shiny on both sides, so I decided to glue another CD onto the back, shiny side out.  This also enclosed the wire that runs from top to bottom of the CD.  Here's a look at the front and back of the bird medallion pieces. 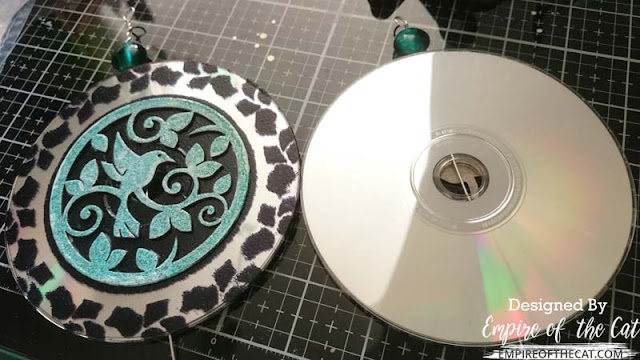 To make sure everything was glued down securely, I used binder clips to hold everything in place and left them to dry overnight. 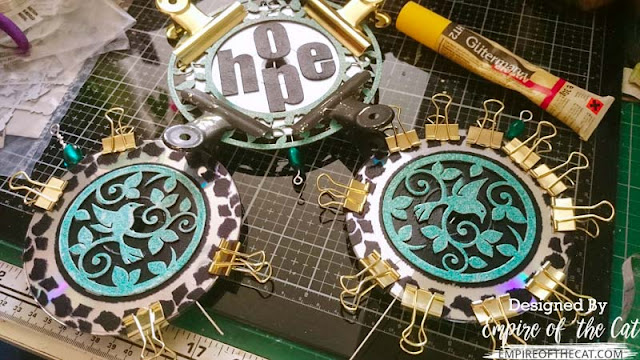 Using pliers open the the eye hook on the top bird medallion CD by turning it sideways.  This retains the integrity of the hook shape and allows it to be easily closed again. Hook the top eye hook from the centre CD through the open eye hook and then close it using pliers.  Repeat this process with the bottom hook on the centre CD with the top hook on the bottom CD, which will attach all three CDs together. 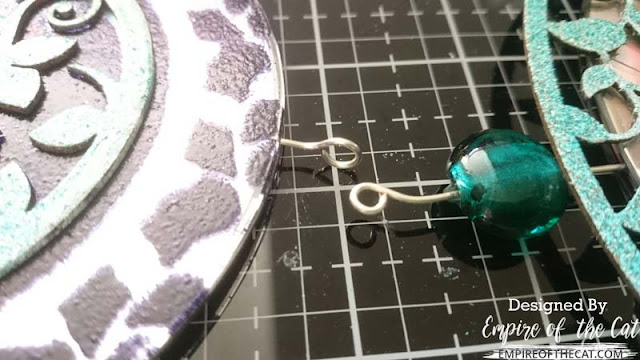 On the bottom CD I decided to make it a bit more fancy since there was space to add more beads. 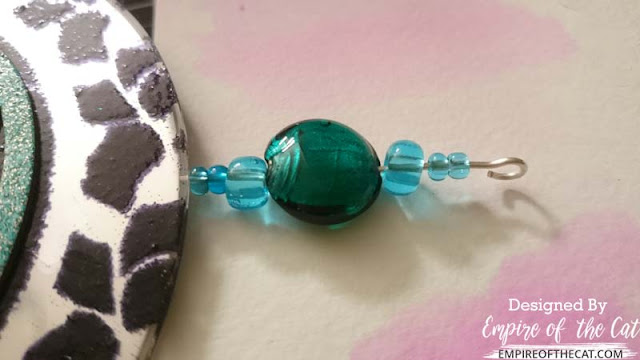 Now that I had added some beads, I decided that it really needed a tassel on the end.  I pulled some options from my stash and since I had added the green beads, I opted for the green perle cotton on the right of the photo. 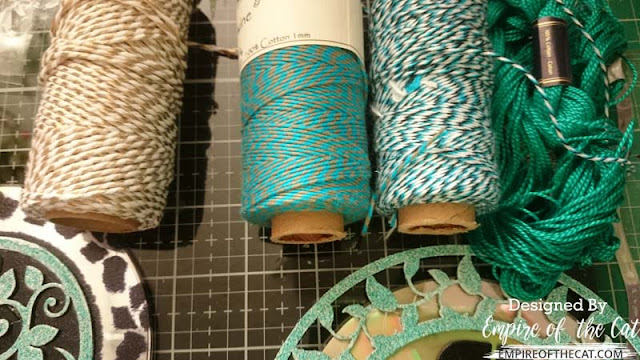 I made a very simple tassel by wrapping some of the thread around my hand or you could use something wider if you want a longer tassel. 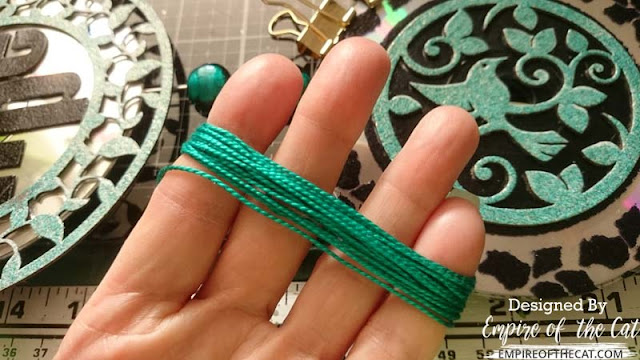 I used some 22ga silver wire to hold it in place and create a basic loop to attach it to the hook on the end of the CD. 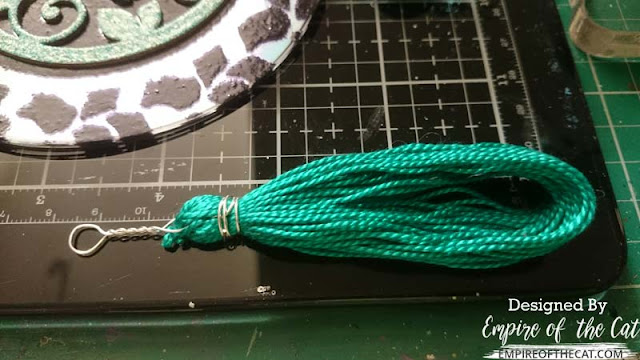 Then cut through the end of the loop to make the tassel. 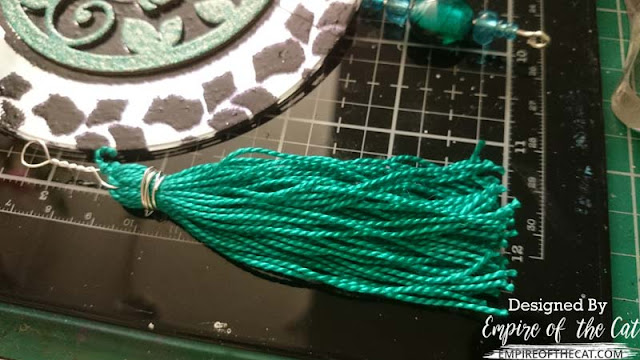 Then I attached the tassel to the bottom of the CD in the same way as before and the sun-catcher is complete and ready to hang up and catch some sun! 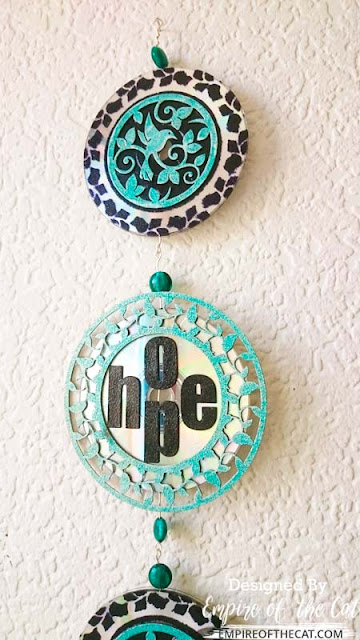 From the top to the bottom... 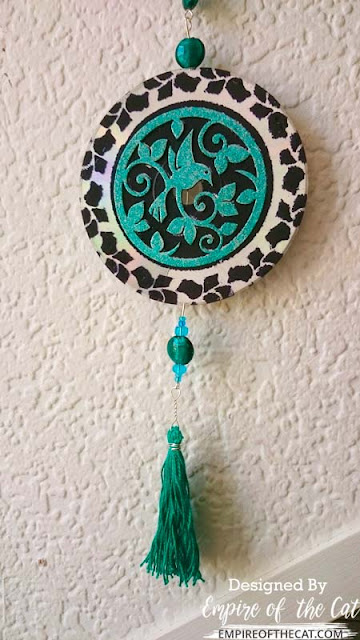 Hide the holes in the middle of the CDs - cover them with silver cardstock.
Instead of adding a second CD to the back, try painting the back or to hide the wire, cover it with pattern paper.
No wire/pliers in your stash - use whatever you have in your stash eg yarn, thread, embroidery floss, baker's twine, regular string, or even left over Christmas ribbon!
If you don't want to try heat embossing CDs, you could paint them instead.
Don't have multiple CDs in your stash - make a smaller project using just one CD with a tassel!

I hope you enjoyed this project and feel inspired to make your own.  Let me know what you think in the comments!