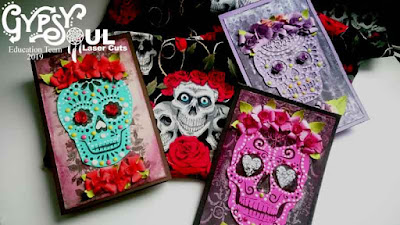 I have another seasonal project to share with you this week, and this time it's using these awesome sugar skull chipboard pieces! Turning them from this... 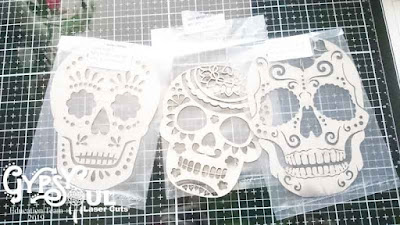 I was torn as to what to do with them as I could think of several ideas to use them for, but in the end I decided to make them into this set of cards which could be used to send to friends or they could also be used for home decor display!  Sugar Skulls are traditionally displayed for Día de los Muertos or Day of the Dead which is celebrated on All Saints Day and All Souls Day, just after Halloween.  For me, I like to display them as Halloween decoration because I love the motif.  I also have some really cool fabric with this design which you will see later on in the post!

I started with these three sugar skulls, which as you can see, are three different sizes and they are sold separately so you can choose your favourite size or get one of each. After wiping them clean of the residue left by laser cutting, I gave them two coats of white gesso, to prep them for painting. 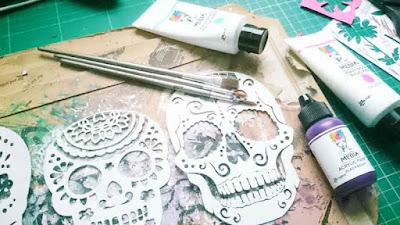 I then painted them with Dina Wakley Heavy Body acrylic paint in turquoise, magenta, and blackberry and left them to dry. Then decided I didn't like how dark the blackberry was so I painted over it with Jane Davenport Feather which is a lavender colour, and goes well with the pink and turquoise. I mention this in case you are confused by the sudden colour change in the photos! 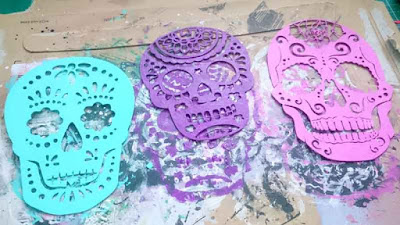 After all the paint was dry, I used some Nuvo Drops in a variety of colours to decorate each skull and left them to dry for an hour or so - the bigger the drops, the longer they take to dry - so make sure they are completely dry before continuing. 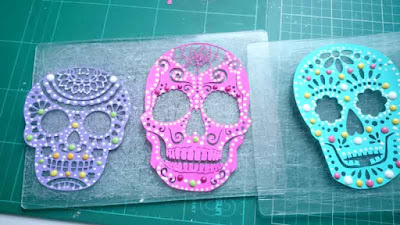 The skulls needed a background as I wanted it to show through the eye sockets etc, so I used some Tim Holtz Metallic Jewels cardstock in Black, and then covered that in Crackle Paint for some extra texture, and again left it to dry.  After everything was dry, I glued the skulls to their crackled backgrounds. 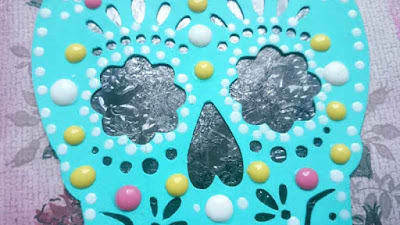 Initially I intended to make them into easel cards so they could be propped open and displayed, but due to the size of the largest skull and my design layout idea, the cards needed to be bigger.  So I went with my go-to card size of 5.5 x 8.5 inches which is one standard sized cardstock scored and folded in half. The cardstock colours I chose were black, ground coffee and wild lilac. 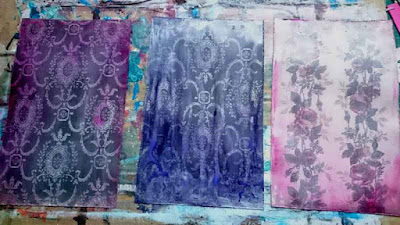 The card panel for each card is made from Tim Holtz Worn Wallpaper (Halloween edition from last year) cut to size and then I covered them with clear gesso, before painting them with liquid acrylics and metallic acrylic paints, and spritzed them with water to allow the paints to run and drip down the wallpaper panels.  I chose colours to match the skulls and the flowers you will see in the next step. Once everything was dry, I glued the wallpaper to each card base and set aside for later.

While that was all drying, I took some coloured cardstock from my stash - this is a lighter weight than I use for card bases and approx 180gsm - and used it to die cut lots of little flowers and leaves from the Tiny Tattered Florals die and the Tattered Florals bigz die by Tim Holtz. 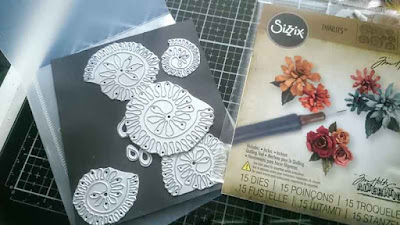 The small flowers are assembled by rolling them around a quilling tool. 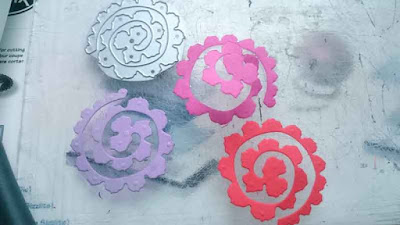 If you don't have this die set, you could make other paper flowers or use premade paper or fabric flowers. 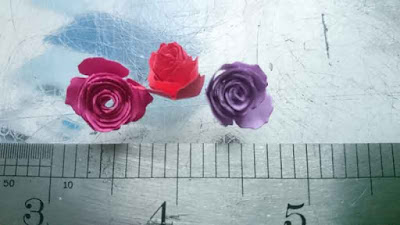 You can see the size of these little flowers - they are teeny tiny! 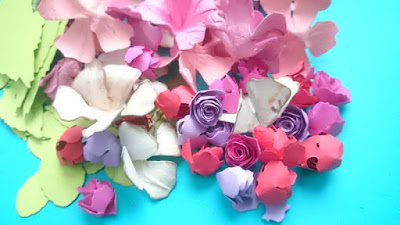 Then I die cut the smallest of the flowers from the Bigz die and rolled them up, spritzing them with water, and left them to dry.  Once they were dry, I carefully unrolled them and used a small paintbrush or a pencil to shape the petals. I made quite a few flowers to make sure I didn't run out halfway through this project, besides it's always good to have extras!

Now that everything was dried and/or set, it was time to assemble the cards.  I started by gluing the skulls to the centre of each card base, leaving enough room top and bottom to add the flowers. 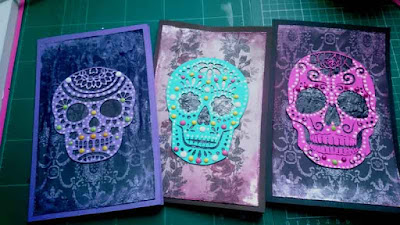 I used small roses for the eyes in the two smaller skulls (the turquoise and the purple) and I used die cut hearts covered in embossing powder for the eyes of the largest skull (the pink one). 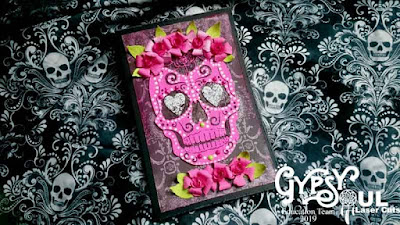 I used another small die cut heart for the nose in the turquoise skull.  This was covered with white Nuvo drops. 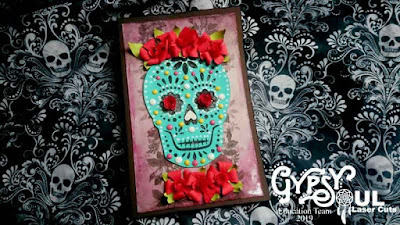 Each skull then needed a floral crown so I took some time to arrange the flowers and leaves I had prepared earlier, before gluing them in place.  The remaining leaves and flowers were added to the bottom of each card. 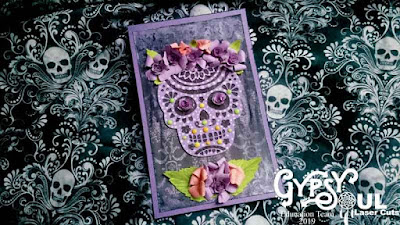 There are no sentiments on the front of these cards because I wanted to use all the space for the skulls and flowers but also because it makes them more versatile plus I wanted to use them for display.  If you needed more protection for some of the 3D elements on the cards, they could also be framed up.

Hope you enjoyed this little tutorial and that you try making some sugar skulls yourself.