This is the Horologium.
Ever seen the movie Time Bandits?
I haven't worked out why yet, but I was thinking a lot about that movie whilst making this and this is what came out of that.
Maybe it's because the props were gorgeous and full of odd details and functions.
Horologium is the Latin word for clock, which seems kind of Time Bandits-ish. And this clock is pretty fancy and has an air of consciousness about it, so I felt it needed a smart name.
Clocks have moving parts, so it's a natural progression of fanciful thought to think they are intelligent. Lots of stories out there about clocks.
And I like making objects that appear to be a little bit (or a lot) sentient.

Here she is with her little traveling eye at the foot of the clock. She gets around. 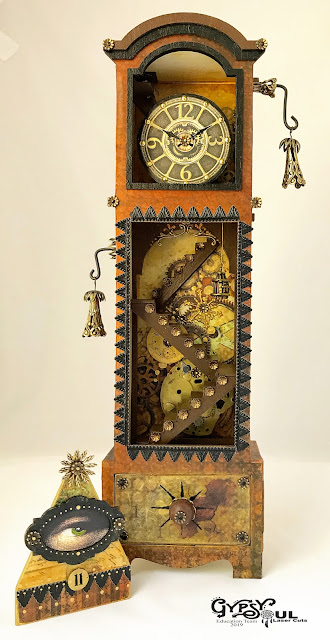 Here is where I began..
I assembled and gessoed the inside of the clock. I did not glue the facade on-that comes later. 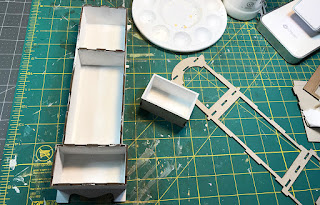 I made a template to build my stairs, then used it on some scrap thin chipboard and then cut them out. I actually made four staircases, but you can't really see the one behind the clock unless you look closely. 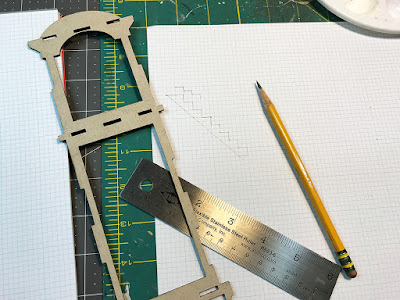 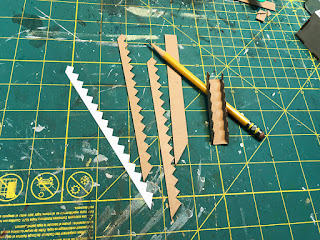 To assemble the stairs, I cut a piece of chipboard about 1/4 in wide and used that as the underside of the stairway. I glued both of the stair jacks (the zig zag bits) to either side of the chipboard making sure as best I could, that they were even with each other and straight. 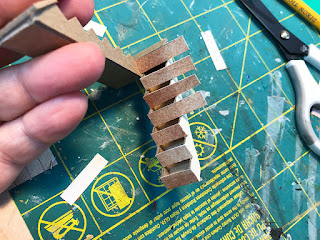 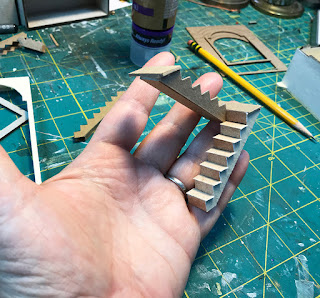 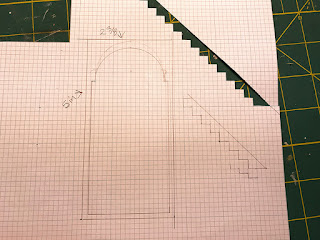 I painted it and put some lifts on the back to make it stand out a bit from the back. My intention was to put one of the staircases behind it to make it look deeper. After some fiddling around, I realized that the third course of stairs that need to fit behind the arch was too wide, so I ended up cutting the underside in half in order to get all the pieces to fit into the clock. You can see in the picture below that the third course (the one on the top) is much narrower than the other two. 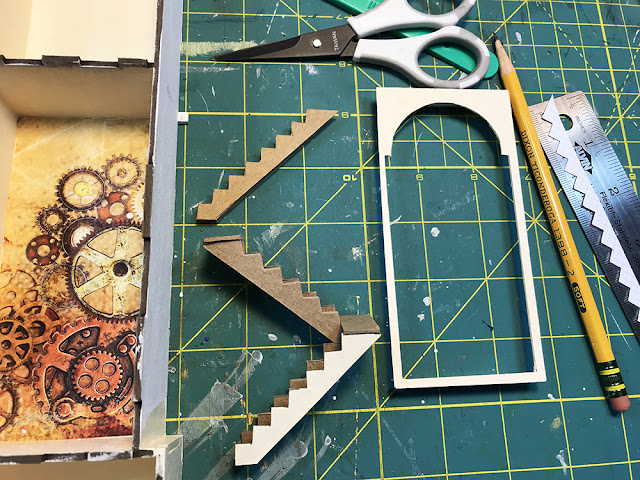 Everything got a coat of brown paint and some detailing with gold paint, was dry-fitted into the clock once again and set aside. 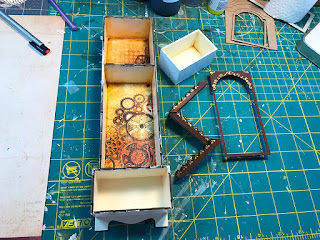 I cut the paper for the facade of the clock using the piece as a template. 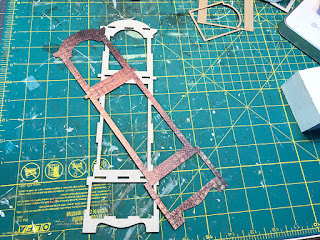 I fitted and then glued a piece of a rice paper image to the inside sections of the clock.
The paper I used throughout the piece, including the rice paper is from Ciao Bella's Codex Leonardo.
I gave it a good coating of matte medium, let it dry and began arranging some clock parts over the paper for more detail, dry-fitting my arch and staircases to make sure I wasn't interfering with the space I needed in the final gluing. 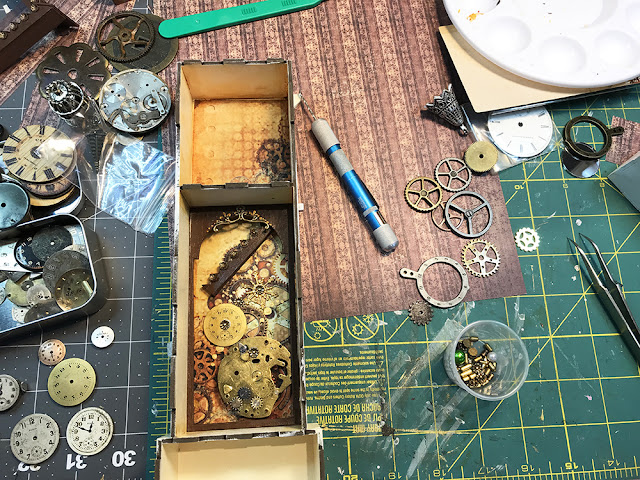 I used a lot of metal stampings in this piece. I decided to change the detailing on the stairs, ended up repainting them and adding little tiny flowers on the jacks. I like it!
After adding the deatils I wanted to the inside of the clock, i finally glued in the stairs and glued the facade on. I painted and added lots of details, like Dresden trim and the little birdcage on the right. 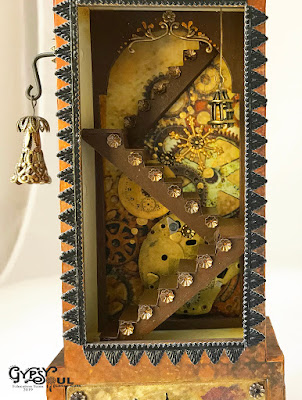 Little flower lanterns made from bead caps and wire, 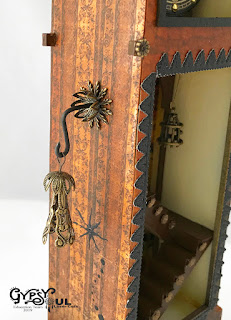 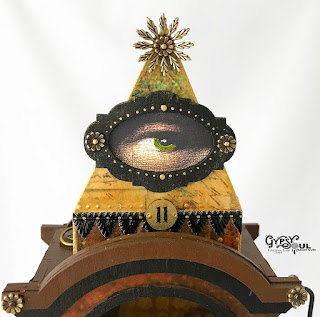 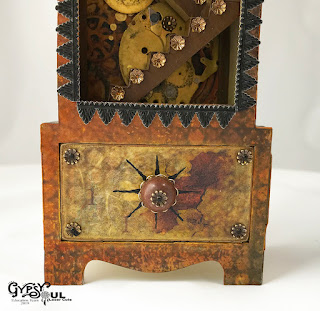 Thank you for stopping by! 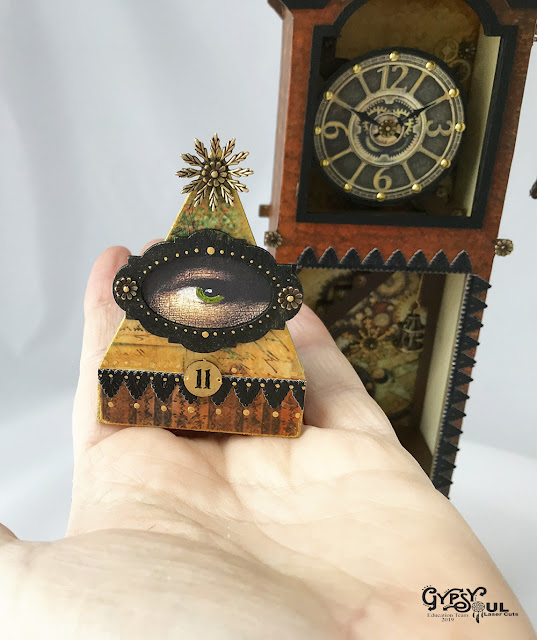 NOTE: The piece with the eye on it is a Simple House Ornament with about an inch and a half cut off the bottom and a tiny wooden block glued on the back!