Nancy here today with one of the Off the Page products from Gina's Designs.  This birdhouse shelf is so much fun to decorate.   Since I have a thing for "feet", and I don't have a lot of wall space left,  I decided to use the Tim Holtz feet instead of hanging my birdhouse on the wall.  Either way, it would be great.  I can think of other ways to display this as well.  I was even thinking of attaching the entire house to an 8 x 10 wooden plaque that I bought at the dollar store.  I'm sure I'll want to play with at least one more of these.

Since we are featuring the lovely feathers this week, I've used them as well on this project.  They are so "feathery" they pick up color really well. 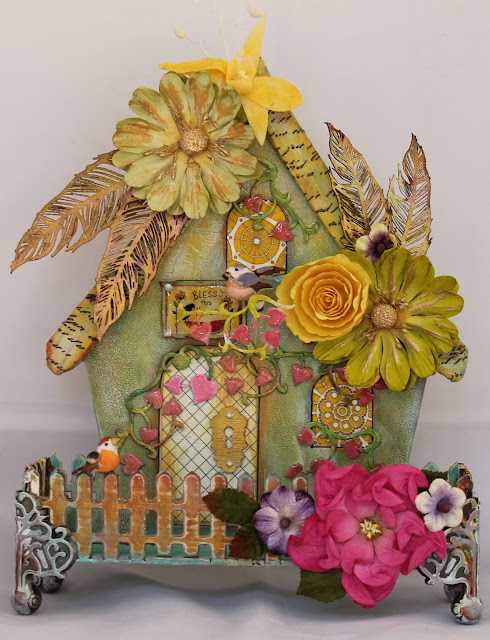 I began by painting my bird house with gesso, followed by two shades of teal in folk art paints.  On top of that I applied Kroma Crackle and various shades of Prima chalk inks.  The Tim Holtz feet were distressed using rub n buff in white and patina.  I used the smallest sized intricate doilies in the windows and the vine frame which I cut apart to use as ivy over the doorways and windows.  After coloring the vines with gesso, then Prima chalk ink,  I applied glossy accents.  The roof was covered in script paper.  The entire house was coated with Tim Holtz Distress rock candy crackle paint.  The feathers were painted with magical mica's in various shades, mostly gold.